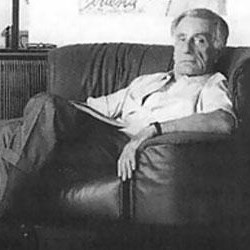 Gianfranco Frattini was an Italian architect and designer. He is a member of the generation that created the Italian design movement in the late 1950s through the 1960s.

Gianfranco Frattini was born in Padua, Italy in 1926. He graduated with a degree in architecture from the Politecnico di Milano in 1953.

Frattini opened his own professional practice in Milan, after having worked in the office of his teacher and mentor Giò Ponti. Frattini became an industrial designer by default when he lacked appropriate lighting and furniture for his interiors. As early as 1954, thanks to Ponti, he began working with Cesare Cassina, who would always remain an important figurehead for him. He was one of the founders of ADI and was involved in the management of the Triennale di Milano on several occasions. He worked with numerous companies in the field of furniture and lighting design including Bernini, Arteluce, Knoll and Artemide, for whom he and Livio Castiglioni designed the “Boalum” floor lamp, a true masterpiece and, above all else, an innovation in terms of product type.

Frattini's relationship with Pierluigi Ghianda, a cabinet maker from Bovisio Masciago, was also extremely important. Beyond the human aspect, this relationship exemplified his passion for working at close quarters with craftsmen, always attentive to the quality of manufacturing and the design stories. Wood was without doubt Frattini's preferred material.

Some of his interior designs, another professional field in which Frattini has left a significant legacy, formed the backdrop for several of Milan's trendiest social venues in the early 1960s, particularly the Stork Club and the St. Andrews restaurant. His designs in Portofino, Capri and the interiors of the Hilton hotel in Tokyo are also particularly memorable.

His work was referenced at the Compasso d’Oro awards numerous times, and he was also a winner of the Triennale di Milano Medaglie and Gran Premio awards. Domus magazine regularly published his work. In 1988 Pier Carlo Santini dedicated an important monograph to him.

Gianfranco Frattini died in Milan in 2004.