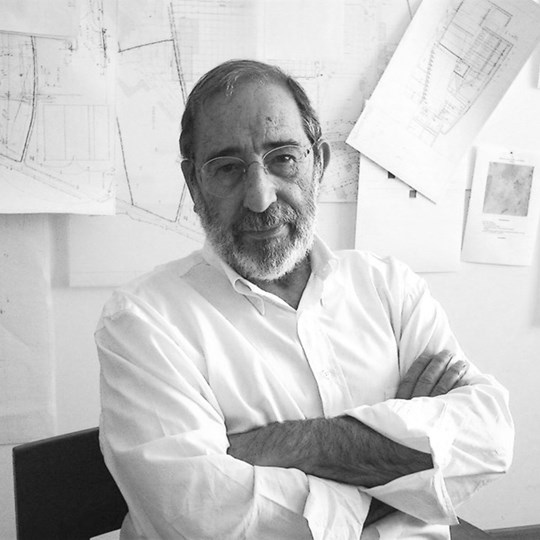 Alvaro Siza (born 1933) is considered Portugal’s greatest living architect and possibly the best that country has ever produced. His works are internationally renowned for their coherence, clarity, and what Siza calls simplism - a quality that recognizes the complexity and contradictions of a project without trying to impose artificial control over them.

Siza was born in the town of Matosinhos, near Oporto, Portugal, in 1933. He studied architecture at the Escola de Belas Artes in Oporto from 1949 to 1955, and his first design was built in 1954. From 1955 to 1958, he worked with architect Fernando Tavora. Through the 1950s, Siza developed several projects in Matosinhos, including private houses, a Parochial Center, a Tourist Office, and a low-cost housing project as well as the acclaimed Boa Nova restaurant (1958-63; renovated 1992) and a public swimming pool in Leca da Palmeira (1958-65). These early projects indicated Siza’s characteristic ability to integrate his designs with the distinct qualities of their environments.

"Embracing the Rhythm of the Air"

Siza’s work, though linked to Minimalism, is considered rooted in Expressionism. These roots can be seen in the formal structures of his designs, which, according to Oriol Bohigas, are “always based on unity of space and volume” and possess “an absolute coherence of function and form.” These qualities are already apparent in the Boa Nova project, chosen in a competition sponsored by the Matosinhos City Council in 1958. The building’s dramatic site on a rocky coastline is integral to Siza’s spectacular design. The completed work, which was restored in 1992, inspired the poem “Alvaro Siza’s Restaurant in Boa Nova” by Eugenio de Andrade: “The musical order of the space, / the manifest truth of stone, / the concrete beauty/of the ground ascends the last few steps, / the contained/and continuous and serene line/embracing the rhythm of the air, / the white architecture/stripped/bare to its bones/where the sea came in.”

In 1966, Siza joined the faculty at the School of Architecture in Oporto (ESBAP), and in 1976 he was appointed Assistant Professor of Construction. Through the 1960s and early 1970s, he continued to design private houses as well as commercial buildings near Oporto. His second swimming pool for Leca da Palmeira displays his brilliant use of space. The design uses a natural rock formation to complement the man-made sides of a large pool placed as if carved out of the sand and rock of the coastline. A smaller children’s pool, changing building, and cafe are also included, and the building is set below the level of the access road to provide an uninterrupted view of the ocean. José Paulo dos Santos has noted in his Alvaro Siza: Works & Projects 1954-1992 that the design contains formal references to Finnish architect Alvar Aalto and to neoplasticist architecture.

Since the mid-1970s, Siza has been involved in numerous designs for public housing. At that time, overcrowding and lack of sanitary facilities plagued many old sections of Oporto, and after Portugal’s revolution against dictator Salazar in 1974, the political group SAAL (servicio de apoio ambulatorio local) responded to urban problems by planning designs to remedy slum conditions. In 1974, Siza worked on renovations for the Bouca quarter that would both resolve the problems that had been characteristic of the antiquated buildings and also fit within the historical context of the site. He used a vertebral wall to screen the project from adjacent railroad tracks. Perpendicular to this wall were four linear terraces of double maisonettes, forming long courtyards reminiscent of the type of neighborhood the new project replaced.

Siza worked with SAAL again in a design for the rehabilitation of the Sao Victor district of Oporto, then embarked on the enormous subsidized housing project in Quinta de Malagueira, Evora, in 1977. This design included 1, 200 housing units as well as institutional and commercial facilities, with a raised service duct, similar to the Renaissance aqueduct that had fed the old city, supplying utilities. "Without grand polemic, " wrote dos Santos, "the scheme touches on the attitudes and formal achievements of European Modernist settlements but rejects their isolation from their contexts. The absorption of the cultural aspirations of different social classes, the pressures placed on the public space by the car, and the ambivalent requirements for communal identity are convincingly resolved in this scheme."

Forming a Whole with Ruins

Siza’s interest in urban design soon brought him to projects outside of Portugal. In the late 1970s he worked on an urban renewal design in the Kreuzberg district of Berlin, and in 1984 he won first prize in the International Building Exhibition (IBA) for the rehabilitation of an entire block in the same district. The project (Schlesisches Tor) was to have maintained the block’s mix of residential and commercial space, but, because of financial considerations, the developer made several changes in the design. The finished project, though, does retain the curved, wave-like facade of the corner building. Doug Clelland commented in Architectural Review that the scheme knits together the existing fabric of the site well, but “lacks the presence and assurance of the decayed nineteenth century block across the street.” Indeed, Siza himself has remarked that “The problem is to form a whole with ruins.” This attention to the past, according to Kenneth Frampton in Design Quarterly, is a quality that distinguishes Siza’s approach from that of many contemporaries. He emphasized that in all of Siza’s collective housing projects there is the "potential for establishing a critical interaction between the new and the ruined."

Among several other public housing projects are Siza’s design for the Guidecca district of Venice, which was first in the 1985 international competition for controlled-cost subsidized housing in the Campo di Marte, and his design for 106 low-cost units in The Hague. The Netherlands project, noted dos Santos, refers to the brick tradition of such architects as Michel de Klerk and J. J. P. Oud, but also shows the influence of Mendelsohn.

During the 1980s, Siza expanded his international repertoire when he was invited to enter several international competitions, including the Expo 92 in Seville in 1986; Un Progretto per Siena, Italy, in 1988; Bibliotheque de France, Paris, 1989-90; and the Helsinki Museum, 1993. He obtained first place in the Schlesisches Tor, Kreuzberg, Berlin in 1980; restoration of Campo di Marte, Venice, in 1985; redevelopment of the Casino and Cafe Winkler, Salzburg, 1986, and La Defensa Cultural Centre, Madrid, 1988-89. During this period, he also worked on several institutional and commercial projects. His Banco Borges & Irmao in Vila do Conde, Portugal, is notable for its vertical identity and its dramatic rotational character, with all the interior floors visually related as in Le Corbusier’s Carthage villa. "JoaÅo de Deus" kindergarten in Penafiel, Portugal, is built on a plinth to respond to challenges of site and to integrate the structure’s various uses.

Siza’s range of architectural interests remains especially broad, from residences to churches, schools, shopping centers, libraries, museums, and even, most recently, furniture. His design for the Oporto Faculty of Architecture, a monumental project, is nearing completion. This comprises several buildings placed along the banks of the River Douro in an arrangement that, according to one critic, suggests an allusion to the Acropolis. Another has noted the influence of Austrian and German architecture in this design, pointing out that Siza’s precision of scale is complemented by the architect’s "subtle understanding of the surroundings." In fact, Siza vigorously opposed a plan to construct a major automobile throughway along the riverbank, arguing that unobstructed river frontage is integral to the Faculty of Architecture’s overall design.

Among Siza’s other unusual projects are a water tower for the University of Aveiro (1988-89), designed as a reinforced concrete slab and parallel cylinder which rise out of a reflecting sheet of water, and the cylindrical meteorological center for the Barcelona Olympic Village (1989-92), built on the beach of the city’s Olympic Port. Critics admired the way in which the design for the meteorological center “has both presence and autonomy with respect to the grand dimensions of the neighbouring volumes and the scale of the Port’s quays and harbor wall.”

One of Siza’s most important ongoing projects is the reconstruction of Lisbon’s historic Chiado district. This area, the principal civic and commercial space for the neighborhood, was heavily damaged by fire in 1988. Seventeen buildings had to be redesigned based on historic plans. The project was complicated by damage from tunnel excavation under the site, which badly weakened the foundations of several buildings, especially the ancient ruins of the Carmo Convent. Siza has been active in seeking solutions for this damage.

In addition to his major design projects, Siza remains deeply committed to teaching. He has participated in numerous conferences and seminars throughout Europe, North and South America, and Japan. He has been a visiting professor at the Ecole Polytechnique of Lausanne, the University of Pennsylvania, the Los Andes School, the University of Bogota, and Harvard University’s Graduate School of Design as Kenzo Tange Visiting Professor. He continues to teach at the Oporto School of Architecture.

Siza’s distinguished work has been widely recognized. In 1982, he was awarded the Prize of Architecture from the Portuguese Department of the International Association of Art Critics, and in 1987 he received an award from the Portuguese Architects Association. In 1988, Siza received the Gold Medal for Architecture from the Colegio de Architectos, Madrid, the Gold Medal from the Alvar Aalto Foundation, the Prince of Wales Prize in Urban Design from Harvard University, and the European Architectural Award from the EEC/Mies van der Rohe Foundation, Barcelona. In 1992, he was awarded the prestigious Pritzker Prize from the Hyatt Foundation of Chicago, for lifetime achievement. That same year, Siza was also named Doctor Honoris Causa at the University of Valencia. In 1993, he won the National Prize of Architecture from the Portuguese Architects Association and was named Doctor Honoris Causa at the Ecole Polytechnique Federal de Lausanne. In 1996, he received the honorary title of Fellow, American Institute of Architects.