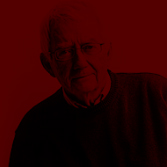 Knud Holscher started his career as a partner/associate of the Danish architect and designer Arne Jacobsen, and he continued as senior partner at KHR architects, the largest and most important architectural office in Denmark in the 1960'ies and the 70'ies.

Knud Holscher has designed projects like Odense University, The Royal Danish Theatre in Copenhagen, the International and Domestic Terminal at the Copenhagen Airport, as well as the National Museum in Bahrain.

Though starting out as an architect, it is his work as industrial designer which has brought Knud Holscher international attention and recognition. His designs have been linked to the Hochschule für Gestaltung Ulm and to the work of HfG Ulm student Dieter Rams. In 2003, he said of his work: "Design should be like buttons on a shirt. With character to catch your attention, but no more so than you can use it without thinking about it".
Holscher has an impressive list of international clients, and he has until today achieved 58 international design awards.