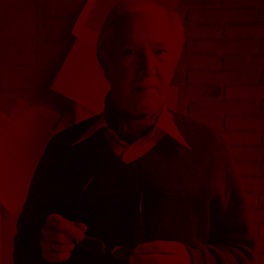 Hans J. Wegner is widely considered to be one of the leading figures in 20th century furniture design and a driving force in the Danish Modern movement that changed the way people looked at furniture in the 1950s and 1960s. His great skill was in fusing modern design and organic sculptural forms with outstanding craftsmanship. Wegner made modern design tactile and comfortable.

Hans Jørgensen Wegner was born in 1914 in Tønder, the son of a shoemaker. At the age of 17 he was apprenticed to a carpenter and it was at this time that he developed his first design. At the age of 20 he moved to Copenhagen to study at the institution now known as The Royal Danish Academy of Fine Arts, School of Design but which back then went under the more modest title of "The Artisan College". He studied there from 1936-1938, before taking further studies as an architect.

In 1940 Wegner initiated a joint project with Arne Jacobsen and Erik Møller in Aarhus, which involved fitting out Aarhus' town hall. It was also in 1940 that he began to work with Master Carpenter Johannes Hansen, a man who played a significant role in bringing modern design to the Danish public. The then Copenhagen Industrial Art Museum (now Design Museum Denmark) purchased their first Wegner chair in 1942. He opened his own design studio in 1943, and in 1944 designed his first "China Chair" in a series inspired by the Chinese Emperor's thrones. One of the chairs in this series, "The Wishbone Chair", is probably Wegner's most famous work and generally considered as the epitome of Scandinavian Modernism.

Wegner has more than 500 pieces of furniture to his name. Many have been continuously in production, while a new surge of interest in his work in the late 1990s led to others being re-released. He has received a number of prizes and recognitions, amongst others: he is an honorary member of The Royal Danish Academy of Fine Arts, has received an honorary doctorate from the Royal College of Art in London and was made Honorary Royal Designer for Industry by the Royal Society of Arts, London. He was also the first ever recipient of the Lunning Prize and received the 8th International Design Award in Osaka, Japan. His works are exhibited at major international museums including The Museum of Modern Art (MoMA) in New York and Die Neue Sammlung in Munich.