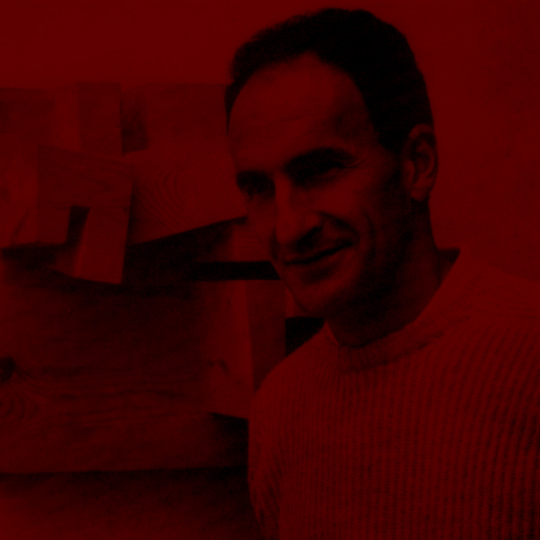 The Spanish sculptor Eduardo Chillida was born in 1924 in San Sebastián in the Basque country. In 1943, he went to Madrid to begin architectural studies, although in 1947 he decided to give up his degree to take up drawing at the Círculo de Bellas Artes in Madris, where he initially focused on working with gypsum and clay. The following year he went to Paris, where he began to produce sculptures, exhibiting one of his works in the Salón de Mayo.

In 1951, one year after his marriage to Pilar Belzunce, he moved to the town of Hernani where he discovered iron and completed his first work using this medium: Llarik. This sculpture reflected his views on sculptural art, with the space being the focus of attention.
His first individual exhibition took place three years later in Madrid, in the Clan Gallery, and the same year he received his first public commission for the doors of the Basilica of Aranzazu.

Over the following years Eduardo Chillida became a renowned sculptor and graphic artist. Alongside numerous international exhibitions, his works were presented at several exhibitions and Biennales.

In 1958 he received the International Grand Prize for Sculpture at the 29th Venice Biennale, a fore-runner to winning almost all of the prizes in existence during his lifetime, including the 1960 Kandinsky Prize, the 1966 Wilhelm Lehmbruck Prize, Germany’s Kaissering Award in 1985, the Prince of Asturias Award in 1987 and the Imperial Prize of Japan in 1991.

His work can be found in more than 20 museums across the world, and exhibitions have been held in several cities including Berlin, London and New York. Public works were an important part of his artistic career, with more than 40 sculptures standing in different places around the world.

Eduardo Chillida spent the last few years of his artistic career in San Sebastián, where he died in 2002. With his oeuvre Chillida became one of the most important sculptors, who produced their objects in a concrete style. The homogeneous material and the division into figure shapes is characteristic of his sculptural work.