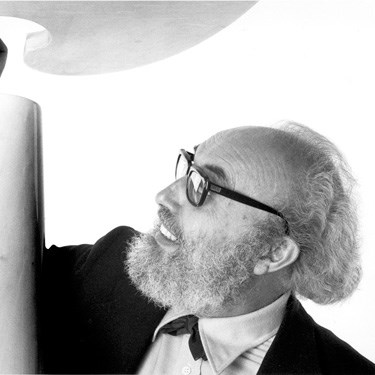 Angelo Mangiarotti was born in 1921 in Milan where he graduated in Architecture in 1948 at Politecnico di Milano. He then moved to the United States in 1953 and started working in Chicago as a visiting professor for the Illinois Institute of Technology and was participating also to the competition for Chicago "LOOP". During his time at Illinois Institute of Technology, Mangiarotti met Frank Lloyd Wright, Walter Gropius, Ludwig Mies van der Rohe and Konrad Wachsmann, all of whom were instrumental in his personal and professional growth.

By coming back from United States in 1954, he opened an architectural firm together with Bruno Morassutti until 1960. In 1989 he founded Mangiarotti & Associates Office based in Tokyo. From 1986 to 1992 he’s art director of Colle Cristalleria.

Mangiarotti, while working as an architect whose works are published in books, specialized magazines and newspapers, had an intense didactic activity made in different Italian and foreign Universities. In 1953-1954 he is a visiting professor at the Institute of Design of the Illinois Institute of Technology in Chicago; in 1963-1964 he’s professor in a course of Instituto Superiore di Disegno Industriale of Venice; he’s visiting professor at University of Hawaii in 1970, at the Ecole Politecnique Fédérale of Losanna in 1974, at University of Adelaide and at South Australian Institute of Technology of Adelaide in 1976; in 1982 he has a contract as professor at the Faculty of Architecture of Palermo; in 1983 he is supply professor for the course of composition at the Faculty of Architecture in Florence, in 1989-90 he has a contract as professor in the graduation course in Industrial Design at the Faculty of Architecture of Politecnico di Milano. He participated in many international seminars and conferences.

In Mangiarotti’s design activity, whose theoretic fundamentals are expressed in the book "In nome dell’architettura" published in 1987, he wanted to enlight the essential characteristics of every object, since only an "objective" design is able to prevent any abuse against the user itself in order to become, instead, recognizable by the collectivity. The architectural language becomes the expression of a new relation between man and environment, while in Mangiarotti’s activity as a designer he gives a very important role to the plastic research. The aim of his research, which is always led by respecting carefully the material characteristics, is the definition of the object’s form as a quality of the material.

He died in Milan in 2012. His design work is marked by a lot of prizes received both in the field of design and architecture.

"Angelo Mangiarotti is an absolutely original figure in international architecture, one of the few Italian masters (like Ponti, Nervi and Piano) capable of exporting his idea and philosophy of design. Mangiarotti's career began in the early 1950s and immediately produced works that became points of reference for the world of architecture, engineering, design and art, thanks to his ability to establish a dialogue with this normally distant disciplines - His profound sense of ethical values, civil commitment and moral rigor in the every gesture of his professional activity make Angelo Mangiarotti a rare example; unique personality being architect, designer and sculptor at the same time." (Beppe Finessi)