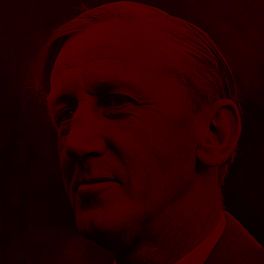 Born in Frederiksberg in 1888, the son of architect Peder Vilhelm Jensen-Klint, exposure to architecture was a natural part of Kaare Klint's early development. However, it was primarily as a furniture designer that he made his mark on Danish architecture.

From his first major works (in collaboration with his mentor, the architect Carl ‘Calle’ Petersen, for the Faaborg Museum in 1914) Klint's furniture was characterized by harmony between his choices of form and materials, often inspired by earlier styles or other cultures.

While Modernism (the Bauhaus movement in particular) was rejecting its heritage, Klint embraced it. He believed that a thorough understanding of materials, proportions and constructions of classical furniture was the best basis for designing new furniture. The design of Klint’s pieces is always based on a relentless research: every piece must fulfil its purpose, be absolutely clarified in its construction, have proportions which correspond to those of the human body, and display materials and craftsmanship of the highest quality.

Kaare Klint was the primary force in the founding of the furniture school at the Royal Academy of Fine Arts in Copenhagen in 1924. As a professor he taught and greatly influenced many of the young designers who went on to pave the way for the golden age of Danish design, most notably Poul Kjærholm, Børge Mogensen and Ole Wanscher.

He also founded the Furniture and Spatial Design Department at the Royal Academy of Fine Arts, where he employed a teaching method considered radical in his day. He asked students to construct furniture items from the inside out, based on thorough pre-analysis. The outward style was less significant; instead, the focus was on function analysis, choice of materials and material processing.

Klint's influence led to a comprehensive renewal of Danish furniture design. He demanded clear and logical structures, with nothing superficial - only honest, pure lines, the best materials, and genuine craftsmanship.

It's no surprise that the man behind such classics as the Safari Chair and the Faaborg Chair, is generally considered as the father of Danish furniture design.