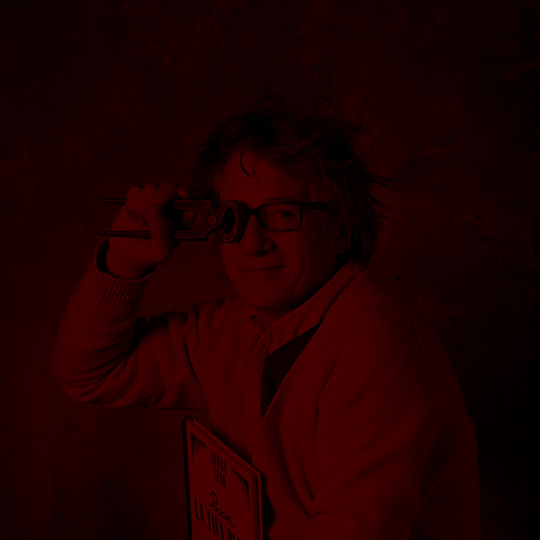 Javier Mariscal is, first and foremost, an image creator who develops his work using all kinds of supports and disciplines. Furniture design, interior design, graphic design, landscaping, painting, sculpture, illustration, web design, multimedia and animation are all the object of his professional activity. In his own words, "My speciality is being creative, innovative, making language go as far as possible, trying to develop codes, signs and graphic messages. Bringing them up to date. Listening, absorbing, observing, expressing what society is breathing in images, what we believe, what makes us feel emotions and the ideas that are changing. To do this I have used any system, language or discipline I have had within my reach."

Javier Mariscal, who was born in Valencia in 1950, has developed his professional career in Barcelona. The Mediterranean culture of both cities is revealed in his work: he has inherited the hedonism, optimism and symbolism that characterize his designs from it, as well as the vibrant range of colours and his poetic approach. Before dealing with projects from a multidisciplinary point of view became a recognized value, his professional activity was already highlighted by moving from one discipline to another without complexes, thanks to his untiring curiosity and his passion to innovate to contribute to make everyday life more interesting, easier and friendlier.

Together with the team of Estudio Mariscal, which he founded in 1989, in recent years, and among many other things, he has done the interior design and graphics for the H&M store in Barcelona, the collection for the Uno Design contract, the 11th floor of Hotel Puerta América Madrid for the Hoteles Silken group, the graphic image of the 32nd edition of the America’s Cup, the image and communication for Camper for Kids, the exhibition of his work Mariscal Drawing Life in the Design Museum of London, the sculptural pergola for Hospital Río Hortega in Valladolid, two monographic publications: Mariscal Drawing Life and Sketches, the dissemination of the new law on children of the Generalitat of Catalonia and the retrospective exhibition Mariscal en La Pedrera.

In 2010, he premiered the full-length cartoon film Chico & Rita which he jointly directed with Fernando Trueba and produced the comic Chico & Rita, published by SinsEntido. The same publishing company was responsible for the illustrated book Los Garriris in 2011. He has collaborated with companies such as Memphis, Akaba, Bidasoa, BD Ediciones de Diseño, Moroso, Nani Marquina, Vorwerk, Equipaje, Alessi, Sangetsu, Magis, Cosmic, Amat3, Santa& Cole, Camper, The ConranShop, Lalique, Phaidon, Vondom, Uno Design, Magis, Leuco, Nemo Cassina, Mobles 114 and Artemide. Mariscal expresses himself through a personal language which is complex in its intention and simple in its statement, innocent yet provocative at the same time, which serves to innovate, take risks and communicate; to carry on exciting the eyes that look at his work and to create complicity with his interlocutor. He proposes a link with our Mediterranean culture and expresses a form of understanding the worlds and life with which we can connect effortlessly.