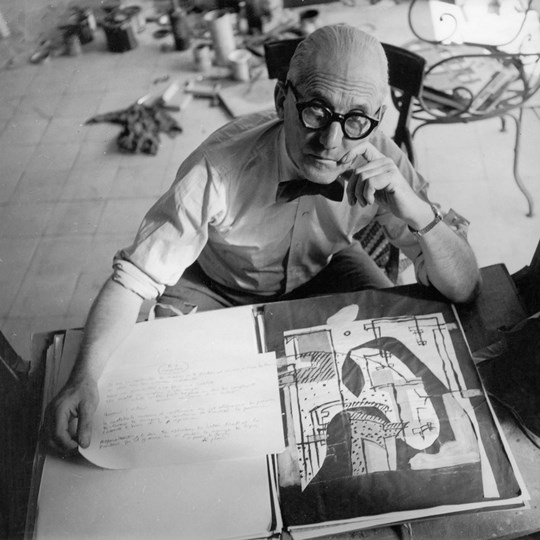 Le Corbusier, who is born as Charles-Edouard Jeanneret in La Chaux-de-Fonds in Switzerland on October 6, 1887, is regarded as one of the most important representatives of architecture and architecture theory of the 20th century. His versatile oeuvre comprises, besides architecture, graphic art, furniture design and sculptures. This diversity reflects his first education that Le Corbusier received as a painter, engraver and goldsmith, and finally also as an architect in his home town. Study journeys through Greece, Italy and Turkey as well as working stays with Peter Behrens in Berlin and with Auguste Perret in Paris complete his training. Le Corbusier comes into contact with contemporary ideas especially when working with Behrens and Perret, this influence facilitates his early rejection of a historicizing eclecticism and contributes to his first important work, the steel frame concrete construction "Domino" for a standardized housing construction.

Having taught at the art school in Chaux-de-Fonds, Le Corbusier moves to Paris in 1917, where he expresses his approach to art in a more theoretic form. Le Corbusier is co-publisher and co.-founder of the magazine "L`Esprit Nouveau" in 1919, which is to become an organ for his ideas. In Paris he met post-cubist Amedee Ozenfant and developed Purism, a new concept of painting. As a reaction to the transformation of the orphistic and synthetic Cubism, they asked for a return to the pure form. The attained rational-reduced representation that should include all arts, is comparable with Bauhaus concepts, integrating standardized serial production. In 1920, still in Paris, he adopted the pseudonym, Le Corbusier.

Paradoxically, Le Corbusier combined a passion for classical Greek architecture and an attraction to the modern machine. He published his ideas in a book entitled, Vers une Architecture, in which he refers to the house as a "machine for living," an industrial product that should include functional furniture or "equipment de l’habitation." In this spirit, Le Corbusier co-designed a system of furniture with his cousin Pierre Jeanneret and Charlotte Perriand, a young architect who had already begun to establish a reputation on the architectural scene of the time. The tubular steel furniture - including the famous LC4 Chaise Longue and LC2 and LC3 seating collections - projected a new rationalist aesthetic that came to epitomize the International Style. Their collaboration lasted through to 1937 and was extremely fruitful, especially in the field of furniture design. The partnership was highly significant, both in terms of the cultural weight of their achievements and their professional successes.

A next and meaningful contribution to architecture theory followed in 1920 with his "Five points for a new architecture". According to his ideas, the esthetic of a new architecture should be coined by "Pilotis" (free-standing pillars on the ground level, which are supposed to carry the construction), rooftop gardens (flat roofs instead of steep roofs), a free design of footprints and facades as well as the usage of long rows of windows instead of single windows, which was made possible by means of a new static system and new materials. His idea of the "five points" can be observed on the Villa Savoye in Poissy (1929-31) or on buildings of the Weißenhof housing estate in Stuttgart (1927).

At the same time, large urban development projects and visions, such as the Paris "Plan Voisin" (1925) or the "Cité Radieuse" in 1930 are realized. The large-scale accommodation unit was to become the structural module for the modern city, an idea that Le Corbusier had continuously worked on since "Domino" ("Citrohan" house; "Immeubles-Villes"). The large apartment complex "Unité d'habitation" in Marseilles, a housing estate with 337 apartments created in series between 1945 and 53, Le Corbusier was able to realize his visions. Similar projects were built in Nantes, Berlin and Briey-en-Forèt, which influenced (not only positively) construction of housing estaes in the 1960s.

The construction of individual buildings is in the focus of Le Corbusier's late work. A famous example thereof is the curvy church of pilgrimage Notre-Dame-du-Haut in Ronchamps - an object that is not only functional: Le Corbusier's later style is characterized by a more subjective, exaggerated and very expressive use of forms.

Though Le Corbusier’s illustrious career came to abrupt end in 1965 when he drowned while swimming in the Mediterranean Sea off Roquebrune-Cap-Martin in France, his influence is undisputed. 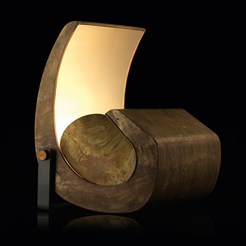