Think of Barcelona and you think of tapas, beach, football, stag parties and, of course, Antoni Gaudí. His work defines the city for many visitors. His wild modernista designs seem to lie on each street corner, marked by a gaggle of appreciative tourists.
But deeply religious Gaudí was an austere character; it was left to Josep Maria Jujol (1879 -1949), his little-known Catalan architect collaborator, to bring a lightness of touch and humour to many of his most famous works. The broken tile mosaics of the city's Park Güell, for example, were made by him. Josep Maria Jujol wide field of activity ranged from furniture designs and painting, to architecture. He worked with Antoni Gaudí on many of his most famous works.

Jujol was the obvious choice to complete La Sagrada Família after Gaudí carelessly stepped in front of a tram in 1926 - but he never got the job, apparently too modest to shoulder his way to the front of the queue. Never mind, you can discover Jujol's own mini "Sagrada Famílias" - and these ones have even been finished, all over Catalonia. 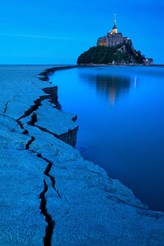