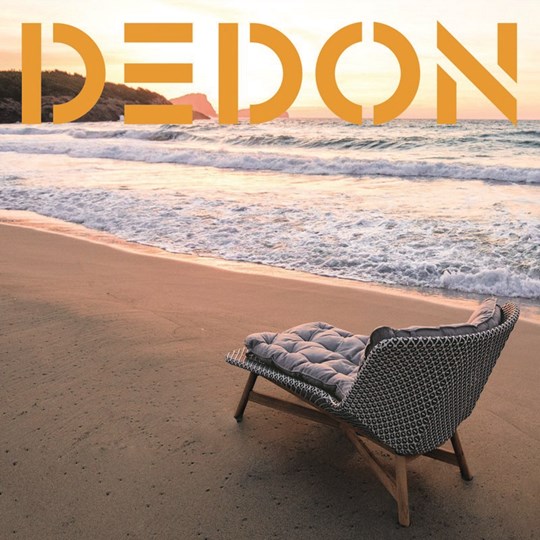 You could say the story of DEDON began in a hospital bed in Munich in 1990. It's here, recovering from a devastating blow to the face, that Bobby Dekeyser, the promising young goalie for the prestigious Bayern Munich soccer club, abruptly decided to leave professional sport to pursue his life's true dream and become an entrepreneur.

"We had no idea what we were going to sell," Bobby readily admits. "The idea was just to work with family and friends in a nice environment, creating beautiful things together."
Hand-painted skis (a major flop), two meter tall raffia giraffe statuettes from Madagascar (a commercial hit but not one on which you could build a sustainable business), an ingenious synthetic fiber - the early days of DEDON were a period of exploration, to put it charitably. Only the fiber, which Bobby had developed with his uncle Seppi, an expert at plastics extrusion, held any real promise. Supple, attractive and weatherproof, it was perfect for outdoor furniture, thought Bobby.

Following a critical encounter at a Cologne trade show in 1991 and a trip to Cebu in the Philippines, the Mecca of rattan furniture weaving, with a roll of the newly developed fiber in his bags, DEDON had turned into an outdoor furniture company.
The early years consisted of steps forward, backward and sideways. But the values Bobby and his family brought to the task - determination, perseverance, self-reliance, flexibility, openness to new people and new ideas, a harmony between one's nature and one's work, and an insistence on having a great time with family and friends, no matter the obstacles - remained constant and indeed became the company's DNA.

By the late 1990s, DEDON was starting to gain momentum. Hervé Lampert, a farm boy from Alsace-Lorraine with big business dreams, joined Bobby at headquarters. Bobby's sister, Sonja, started cooking up the marketing campaigns that would help put the company on the map. Uncle Seppi continued to enhance the look, feel and quality of DEDON Fiber. And renowned designer Richard Frinier began creating original collections for the company.

Finally, in the year 2000, unable to attain the level of quality they demanded from suppliers in Thailand and China, Bobby and Hervé decided to setup their own factory. They chose Cebu island, the place where DEDON furniture got started; home to some of the greatest weavers in the world. Although a massive and risky undertaking, this allowed the company to control the quality of their products every step of the way, from fiber to frame to weaving to packaging and logistics.

A move to new headquarters in 2004 - a 7,500m² facility on 46,000m² of land - offered Bobby a unique opportunity to bring DEDON's founding values to life on an even larger scale. From fitness training to gourmet Italian lunches, employees enjoyed benefits unheard of in most companies at the time.

Over in the Philippines, meanwhile, the team had expanded to more than 1,800. Here too, it was time to move to an even larger facility. And here too, Bobby and Hervé saw an opportunity not just to hype their values but to put them into practice. As they saw it, the Philippine team was responsible for creating the most beautifully hand-crafted outdoor furniture in the world. It was critical that their new factory be a model for the country and the world.

By 2005, DEDON was becoming a household name. This was due in no small part to the growing roster of stellar designers. New collections such as Frank Ligthart's LEAF were garnering "red dot" and other prestigious awards around the world. And when Germany's World Cup soccer team was photographed on the ORBIT in 2006, it sent Frinier's futuristic design right into the stratosphere - even Brad Pitt had to wait in line for one.

In the first decade of the millennium alone the company has gone from a team of three to a team of 3,000. Their exclusive outdoor furniture, unrivaled in quality and design, is now sold in more than 80 countries worldwide. More than 25 years on, DEDON is one of the world's premiere outdoor furniture brands, its products setting and continually raising the standard for quality, design and desirability.

And in their own words: "As proud as we are of all that we've accomplished, we're prouder still of how we accomplished it - as family and friends, with respect and love and trust, always celebrating life. That, to us, is the real DEDON story."